X-Men Evolution Wiki
Register
Don't have an account?
Sign In
Advertisement
in: The Acolytes, Group, A to Z

"So I can be a lackey like you? I don't think so!"
—Wolverine to Colossus

When the original Brotherhood fell out of Magneto's favor due to both their incompetence and uncertain loyalty, Magneto created a new team. Though never named on-screen, they are referred to as The Acolytes, named after Magneto's second-most famous team from the comics (the first, of course, being the Brotherhood of Evil Mutants). Sabretooth and Quicksilver were retained, but the rest of the team was brand new. The Acolytes were first referenced in "On Angel's Wings," when Magneto invited Angel to join him (he refused). The team was first revealed during the second season finale, "Day of Reckoning," where despite being quite smaller in number than the combined forces of the X-Men and the Brotherhood, held their own against both. They were the primary threat against the X-Men in Season Three until the threat of Apocalypse sidetracks Magneto. Magneto apparently sought to further expand the team, forcing the Brotherhood to prove they were worthy of being Acolytes and even trying to recruit Wolverine (he also refused). The team roster does not seem to be stable, as Sabretooth and Mastermind tend to disappear, Quicksilver is never presented as a member in promotional material (despite being one), and in "Dark Horizon" Toad and Blob are briefly seen among the Acolytes.

When Mesmero returned to enslave Rogue, using her to absorb all of the powers of the X-Men and The Brotherhood, Sabretooth was still working with Magneto. During Scott and Jean's graduation ceremony, Magneto and his team arrived, ruining the ceremony, and allowing Magneto to tell them what Rogue had done. The two teams combined, and Charles Xavier realized that he might know where Tomb of Apocalypse was. With the help of Cerebro, Charles unlocked the memories he gained from Mesmero and believed to have found that Apocalypse was entombed underneath Giza. However, when the combined Brotherhood/X-Men team arrived, they found out it was a trap, and fought their way through to an ancient room, where Beast translated the Hieroglyphics and found out that En Sabah Nur was the first mutant, and that an ancient pharaoh named Rama-Tut had found a ship hr believed not of this Earth, though it had really been created in the future, and that Apocalypse had seized control of it in order to turn all the world's people into mutants. Using his own mind to control the ship, Xavier teleported them all to Apocalypse's real tomb in Tibet, where Gambit, Sabretooth, and Wolverine had tracked Mesmero, Rogue, and Mystique to already. However, the team arrived too late to stop Apocalypse from drawing all of their powers from Rogue and becoming powerful enough to live up to his name 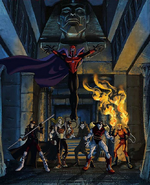 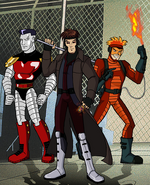 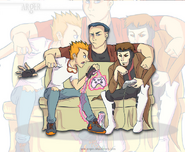 Other faces of Magneto's Acolytes