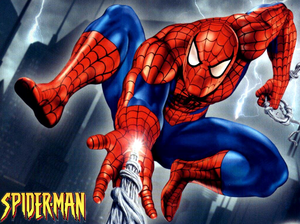 Spider-Man is a 'Marvel Superhero character who is also goes by the name, Peter Parker. Though he never appeared on X-Men: Evolution he did have multiple refferances made to his story arch, one that often crossed over with that on the characters of X-Men, as both live in New York City.

Retrieved from "https://x-menevolution.fandom.com/wiki/Spider-Man?oldid=23364"
Community content is available under CC-BY-SA unless otherwise noted.