They were both orphans and illegally adopted at an early age by criminals, and then used for their powers.

Remy Lebeau wandered the world as he plied his skills as a master thief, aided by his mutant power. At one point Remy had approached the master geneticist Mr. Sinister for help in controlling his powers. Sinister removed some of Remy's brain tissue to reduce his power levels, thus affording him a greater degree of control. As a result, Remy was now in his debt, and Sinister subsequently charged the thief with assembling the team of assassins called the Marauders. Remy did not realize that Sinister would employ the Marauders to massacre the underground mutant community known as the Morlocks. Seeing the horrific results of his actions, Remy attempted to stop the massacre but was almost killed by the Marauder named Sabretooth. However, he did manage to save one young Morlock girl who would one day grow up to become the X-Man named Marrow.

Eventually, Remy encountered Storm, a member of the outlaw team of mutant adventurers known as the X-Men. Storm had been transformed into an amnesiac child who had turned to theft as a means to survive. Remy helped her escape her enemy, the malevolent psionic entity known as the Shadow King, and they became partners. Later, when the X-Men's founder Professor Charles Xavier returned from a long period of traveling in outer space, Storm sponsored Remy's admission into the X-Men. Remy soon fell in love with his fellow X-Man, Rogue, blessed and cursed with the ability to absorb other mutants' thoughts and abilities through skin-on-skin contact. The feeling was mutual, but the two soulmates were condemned never to touch. At one point, Rogue left the X-Men after she kissed Remy and absorbed a portion of his memories, learning of his role in the Morlock Massacre.

Remy was subsequently captured and brought before a mock trial held by Magneto, disguised as Erik the Red. He was summarily cast out of the X-Men and was abandoned in the frozen wastes of Antarctica. Starving to death, Remy made his way back into Magneto's citadel where he came upon the psionic essence of a dead mutant named Mary Purcell. The wraith-like Mary bonded with him, allowing him to survive until he reached the Savage Land, a hidden jungle nestled in the icy wasteland. There, Remy struck a deal with the enigmatic being known as the New Sun. In exchange for passage back to America, Remy agreed to run errands for the New Sun.

Remy returned home and encountered the X-Men again when he attempted to steal the fabled Crimson Gem of Cyttorak for his new employer. He agreed to return to the team, mainly for his self-respect and for his love for Rogue. However, Mary began to threaten Remy and his friends if he didn't agree to stay with her forever. When the X-Men finally found out about Mary, the wraith fled with Remy to her old hometown, where she tried to force him to merge with her and become a new type of hybrid lifeform. While Remy wrestled with her, Rogue charged in with a containment unit, which ultimately dispersed Mary. During a trip back in time, Remy's powers were restored to their maximum potential by Sinister and he was able to utilize them to return to the present. Soon after his return, Remy served for a time as patriarch of the Thieves' Guild in his father's stead, as well as leading one of two teams of X-Men. Remy was also responsible for the unification of the Thieves' and Assassins' Guilds into the Unified Guild, of which he also served briefly as patriarch.

Meanwhile, the New Sun revealed his true nature after organizing an assassination game for a cadre of super-powered mercenaries with Remy as the target. When Remy took the fight back to the New Sun, he was shocked to learn that the New Sun was actually an alternate reality version of himself. In his own reality, the New Sun's kinetic charging powers had flared out of control, burning the world and killing everyone. As a result, the New Sun hunted down and killed versions of himself in other realities to ensure that they would not repeat his mistakes. During their final battle, Remy burned out his enhanced powers to defeat the New Sun, ending his threat and returning his powers to their normal level.

Remy was later framed by mutant businessman Sebastian Shaw for the death of the Australian crimelord named Viceroy. With the assistance of Rogue, her team of X-Treme X-Men, and former Triad member Red Lotus, Remy was able to clear his name. Soon after, Remy became embroiled in the X-Treme X-Men's fight against an alien invasion of Earth. He was captured and used as a power source for the invaders to open a portal that would allow their full invasion fleet to pass through and complete the conquest of Earth. The process was halted by the enigmatic villain known as Vargas, who plunged his sword into Remy's chest. Remy survived, but found that he had lost his mutant abilities. As a result, he and the also-powerless Rogue sought to live a normal life together and retired from the X-Men. However try as they might, a normal life was not for them to lead as the pair soon became embroiled in the X-Treme X-Men's fight against the mutant predator Elias Bogan. After Bogan was defeated, the X-Man named Sage used her mutant ability to "jumpstart" Remy's mutant powers and he rejoined the team.

In an alternate future over 70 years from now in which the X-Man Bishop was born, Remy had become an aged figure named the Witness, so-called because he had apparently witnessed the betrayal of the X-Men by one of their own members. He was also thought to be the last survivor of the X-Men. Upon joining the X-Men himself, Bishop suspected Remy to be the traitor until realized that Xavier's mind and Magneto's mind spawned the corrupt psionic entity known as Onslaught.

As Death, Gambit attacked his lover Rogue and his former group X-Men. Cyclops arrived with The Avengers to stop Apocalypse and his Horsemen. Apocalypse finally lost, and seems dead for a while. Sunfire, Apocaypse's other Horseman rescued Death from battle and they escaped. Afterwards they returned to take Polaris, who had also become a Horseman of Apocalypse only to find Polaris had been injured in the last battle and was now in a coma. Death and Sunfire lost the battle and were forced to run from the X-Base. Afterwards they discussed what will happen to them without Apocalypse. During their conversation, Mr. Sinister found them and they joined his Marauders.

As Death, Gambit regretted attacking Rogue. Sinister rescued him from his Death form, leaving Gambit feeling betrayed by the X-Men and indebted to Sinister. In the end, Gambit decided to stay with Sinister. The Marauders waited for the right time to attack the X-Men, with Gambit at the Marauders' side. During the battle, Mystique betrayed the X-Men and shot her step-daughter Rogue, Gambit's lover. They then took Rogue and ran. The Marauders had won the first battle.

When Bishop attacked Cable, Gambit rescued the baby, but as he returned to Sinister, he discovered Mystique killed him. Gambit felt as if he was finally free, and when Mystique used the baby to try to heal Rogue, Gambit saved baby again. Professor X and Cable came to take child, so Gambit gave the baby to them. Rogue was healed, and even though she wanted to kill Mystique, she didn't. Rogue's final request of Gambit was that he didn't follow her.

Rogue and teammate Gambit fell in love despite her inability to safely touch him. Eventually, he and Rogue formed a splinter group with four other X-Men to search for Destiny's diaries, which predicted the future of mutant kind. During their quest, Rogue and Gambit were rendered powerless, and the pair seized the opportunity to pursue living a normal life together in the mutant-friendly community of Valle Soleada in California. Soon after, they came to the X-Men's aid against the mutant predator Elias Bogan and subsequently rejoined the team. Regaining her power of absorption thanks to the jumpstarting ability of her teammate Sage, Rogue set out on a personal quest to rediscover her past.

Returning to Xavier's mansion, Rogue and Gambit began telepathic therapy sessions with Emma Frost to try to find a solution to their inability to touch, without success. A student of Gambit named Foxx tried to seduce him and was revealed to be Mystique. Mystique wanted to break up the couple so that Rogue could finally have a normal relationship with someone else. Mystique brought along her protégé Pulse for this purpose, but this backfired when Pulse didn't want to be used. Rogue stayed with Gambit until he was transformed by Apocalypse into Death, one of his four Horsemen. Rogue refused to believe her love had turned, but after Death tried to kill her a few times she started to let go. She still holds on to the hope that he will eventually return, but that seems like a slim chance, even to her. Following the breakup, Rogue worked with Cyclops and Emma Frost to rescue mutants being experimented on by a clinic. Afterwards, she was offered a role as a strike team leader by Cyclops. With the luxury to choose her own team, Rogue put together a motley crew of X-Men and former villains, including Mystique, to stop the Children of the Vault, advanced humans who had attacked the mansion. After she and her team defeated the Children Of The Vault, Rogue announced her teams departure from the mansion. Recently Rogue and her squad had to take down a villain named Pandemic, pandemic's goal was to take Rogue's power and add it to his collection of powers that he had absorbed already, he infected her with a disease called strain 88, which affected her negatively. When her squad of X-men took Pandemic down they freed Rogue but she was too weak to do anything and had to be hospitalized on Cable's island,Providence. While on Providence a new threat was released within the mind of Lady Mastermind, (Mastermind's daughter) called the Hecatomb.With the other X-men having a difficult time defeating the Hecatomb, Cable with his mind merged with an alien species that wanted to destroy the hecatomb had no other choice but to wake Rogue from her comatose state of mind. She easily defeated the alien by absorbing it's powers and memories since the hecatomb had already taken in so many lives and alien species beforehand. Although she has recovered, she now seems to have a hunger to absorb the people around her.

Other faces of the Romy 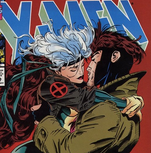 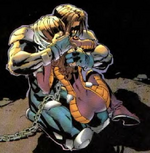 Cite error: <ref> tags exist, but no <references/> tag was found
Retrieved from "https://x-menevolution.fandom.com/wiki/Rogue_and_Remy_-_Comics?oldid=32852"
Community content is available under CC-BY-SA unless otherwise noted.