"I'm real glad you dropped by... 'cause I've been bored
outta my skull!"
—Pyro to Wolverine

St. John is the cocky, loud-mouthed Australian member of Magneto’s Acolytes. He's a crazy pyromaniac with a cackling laugh. He has an affinity for destruction and complete ignorance of consequence border on outright insanity which might connect to his Pyromania. In one notable scene, he is watching footage of Magneto's supposed demise at the hands of Apocalypse, rewinding, playing back, and laughing several times.

St. John is a young Australian man with a tall and lean frame. He has wild red-blonde hair and blue eyes. He is always seen wearing his red and orange outfit with blue boots and gloves. He wears a flame-thrower around his back that he uses to manipulate fire. He wears a mask around his head with an orange visor to keep his eyes protected.

Pyro is a mutant with the psionic ability to manipulate fire to increase or decrease its size, intensity, and heat. He can mold fire to take on any form he can imagine, even living creatures. Pyro can then mentally control his creations to do anything he wants, and cannot be burned by any flame he controls.

Pyro's only known weakness is that he is incapable of creating fire and that he can only manipulate it. He often uses a flame thrower he carries on his back to provide him with a ready source of fire.

St. John Allerdyce was born in Sydney, Australia. Although named St. John, he preferred the name John. As he got older, he learned he could manipulate and control fire, but was unable to create it. Little is known about his past life other than he was a writer and spent most of his time in South East Asia, working as a journalist and later attempted a career as an author of Gothic novels. At some point, he was offered to join Magneto's Acolytes, which he did willingly.

Johnny showed up as Pyro at the very end of season two with Magneto, and along with the rest of the new Evil Brotherhood. He doesn't have any lines in these two episodes, although he is seen momentarily between certain points, such as igniting the barrel and throwing it towards one of the X-Men.

Pyro is seen between certain episodes and has few lines between this. He can say stuff momentarily towards Magneto and the brotherhood, or towards a X-Men that may be trying to attack him. Pyro is not seen very much in the Season, but you might be able to hear him speak occasionally.

Pyro originally helped Magneto with his quest to stop Apocalypse but apparently genuinely hated the master of magnetism on the inside, as he found nothing more amusing than watching the tape of Apocalypse killing him over and over again. This is shown when Wolverine infiltrates the building in which he is watching the videos to ask about the location of Gambit. He at first fights Logan off with the help of a fiery dragon/phoenix figure, but Logan disables his flamethrowers, then demanding an answer. Pyro tells Logan essentially that he has no idea where any of them are.

When Mesmero returned to enslave Rogue, using her to absorb all of the powers of the X-Men and The Brotherhood, Sabretooth was still working with Magneto. During Scott and Jean's graduation ceremony, Magneto and his team arrived, ruining the ceremony, and allowing Magneto to tell them what Rogue had done. The two teams combined, and Charles Xavier realized that he might know where Tomb of Apocalypse was. With the help of Cerebro, Charles unlocked the memories he gained from Mesmero and believed to have found that Apocalypse was entombed underneath Giza. However, when the combined Brotherhood/X-Men team arrived, they found out it was a trap, and fought their way through to an ancient room, where Beast translated the Hieroglyphics and found out that En Sabah Nur was the first mutant, and that an ancient pharaoh named Rama-Tut had found a ship hr believed not of this Earth, though it had really been created in the future, and that Apocalypse had seized control of it in order to turn all the world's people into mutants. Using his own mind to control the ship, Xavier teleported them all to Apocalypse's real tomb in Tibet, where Gambit, Sabretooth, and Wolverine had tracked Mesmero, Rogue, and Mystique to already. However, the team arrived too late to stop Apocalypse from drawing all of their powers from Rogue and becoming powerful enough to live up to his name

When Charles Xavier was under Apocalypse's control, he was able to scan the mind of Apocalypse. In The Future, Xavier saw adult versions of The Brotherhood including Pyro becoming members of S.H.I.E.L.D.'S Freedom Force. He's shown to be wearing a similar uniform in design to his old one, though it's a darker reddish-orange motif, including orange ribbing running up the legs and stopping mid-thigh, and running along his sleeves and inward to his chest, where a tall collar began. He wears dulled blue boots and gloves with added black straps and his old orange goggles, but without his form-fitting hood. On his back, Pyro wears a new, more efficient tank, along with new, more streamlined flame emitters strapped to his wrists.

Other faces of Pyro 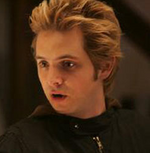 Marvel Strike Force (2018)
Add a photo to this gallery

Retrieved from "https://x-menevolution.fandom.com/wiki/Pyro?oldid=32979"
Community content is available under CC-BY-SA unless otherwise noted.