His fun-loving nature can sometimes get Kurt into trouble. For example, while playing around with a machine he discovered in an abandoned lab, he was caught in the "Middleverse" created by a student named Forge, who was himself trapped in this pocket dimension. Kurt's power came in handy here, as his teleportation allowed him to ghost back into the real world and alert the team, who eventually rescued both boys. Another time, Kurt (and Kitty) piggybacked on the X-Jet when Wolverine took it to Canada and ended up in the middle of a big fight between him and Sabretooth, and against the head of the Weapon X project.

While wearing his image-inducer, Kurt's appearance is of a, light-skinned young teenage boy. He has blue-ish black hair with dark eyes.

Kurt's mutant physiology grants him advanced agility, reflexes, balance, the ability to cling to solid surfaces and a prehensile tail he can use to grasp and handle objects. His tail is strong enough to support his own weight when he stands on it.

His mutation also grants him the primary power to teleport through inter-dimensional phase-shifting, vanishing from our dimension into another for a fraction of a second, then reappearing instantaneously within our dimension in any pre-determined space within a limited, two-mile range. When Kurt teleports, he leaves behind black smoke and a smell of brimstone, which is the atmosphere originating from the alternate dimension he phases into. Kurt can teleport himself as well as other people and objects. He has teleported as many as 3 people and a moving car.

The only other limitation of his teleporting ability is that he has to be able to see or know where he is going, otherwise he risks reappearing inside a solid surface. Kurt seems to possess a limited spatial awareness that helps him avoid reappearing within solid constructs as long as he knows where he's going.

When Kurt Wagner was born, his mutation was readily apparent, due to his blue fur, pointed ears, strange extremities and prehensile tail. His mother, Mystique found out that Magneto, whom she was working with at the time, had been genetically experimenting on him. She tried to leave, but was pursued by Magneto and a pack of wolves. She accidentally dropped the baby into a river where he was found by Mr. and Mrs. Wagner. The Wagners loved Kurt, but understood that he could not walk freely in the outside world, as people would be horrified by his appearance. Eventually, the young mutant was discovered by Professor Charles Xavier. When Mystique found out that he was alive, but living happily with foster parents, she left him there, understanding that he could have a happy life with them, instead of living like the criminal she was.

When Rogue's absorbed powers took control of her, Mystique informed Rogue that she adopted her when she was four, and it turns out that Nightcrawler now has a sister.

During Apocalypse's last fight, Kurt helped Cyclops and Wolverine in fighting Apocalypse directly. He, however, was knocked unconscious with a simple attack from the powerful evil mutant.

At the end of the series he and his sister Rogue (no longer in control by the Apocalypse) banded together telling their mother that they want absolutely nothing to do with her not caring about her apologies to them. After confronting Mystique, he and Rogue move on with their lives without Mystique.

When Charles Xavier was under Apocalypse's control, he was able to scan the mind of Apocalypse. In The Future, Xavier saw adult versions of the X-Men including Nightcrawler. He is shown to be wearing a black X-Men bodysuit with dark red accents on the shoulders, running down the arms and matching dark red sections on his hips. He has an "X" logo patch on the left-hand side of his chest, a gold utility belt also bearing the "X" logo, matching gold gloves and boots, and two dark gray knee pads. Also, Nightcrawler has a shorter haircut and is noticeably more muscular.

Other faces of the Nightcrawler 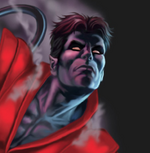 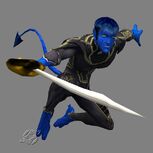 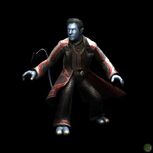 Retrieved from "https://x-menevolution.fandom.com/wiki/Nightcrawler?oldid=33223"
Community content is available under CC-BY-SA unless otherwise noted.