Kitty Pryde isn't that much of a neat freak, but she still likes to have order in her life. Lance, on the other hand, doesn't follow a strict schedule and has trouble just making it to his classes on time.

Together, they seem to balance each other out. They had science together one year (it's unknown if it was a split class, or if Lance failed science and had to repeat), and Lance showed up to all his science classes with Kitty. Both to make a good impression on her, and he seemed to take a little bit more of an interest in the subject after understanding it more.

Kitty becomes less vally-like, and Lance becomes less rugid, as each puts in effort to make the other one comfortable.

They were both born and raised in Deerfield, Illinois, USA. They went to different public schools, but ended up first meeting each other in high school in the hallway since they are a year apart in age.

They both moved to New York, New York about a week apart from each other, and again ended up going to the same high school as each other. A couple years later, then even had a science class together.

At Kitty Pryde's school. Riley Finn and Sydney White shove her into her locker and lock her in. Lance Alvers shows up spray painting the lockers and Kitty accidentally phases through and slams into him. Lance is excited about Kitty's power, but Kitty just tries to play it off like nothing happened. He tells her he understands because they're alike, and then shows her his power (he causes tremors and shakes the school). Kitty gets upset and runs off.

During P.E., Kitty trips trying the long jump and loses her balance again. Sydney & Riley laugh at her. Lance and his buddies are on the roof, when one of the girls that laughed at Kitty takes her turn, he causes a tremor and buries her under the sand. Kitty sees him and tries to run off again.

Lance talks Kitty into phasing in the office. She's excited about her powers for the first time, but when she finds out why he really wanted her to phase in, she gets upset and wants to leave. Jean and her parents show up to try and talk her out of goin with Lance. Lance gets angry and tries to drag Kitty along with him. When she refuses and phases free, he drops the ceiling on her. Kitty phases free of the rubble and uses her power to save everyone. They leave each other on a sour note.

At lunch, Lance, Rogue, and Todd were all sitting together when a food fight breaks out and Fred Dukes ends up busting up the cafeteria. Kitty was sitting with Jean & Scott a table over.

Blob, Avalanche, and Toad show up in the storage room looking for Rogue. Scott is surprised that Rogue is working for Mystique. Avalanche asks whose side she's on and Rogue says it's not her fight and leaves. The rest fight over the gizmo. Jean and Scott put the Blob down. Avalanche knocks Kitty through a wall, but she phases back through and calls him a loser.

Kurt and Forge use the battery from Raven's car and drive it right through the portal. They run over the gizmo, smashing it and then straight into the Blob. The Brotherhood take off since the gizmo is smashed, as it was what they were after.

In the mountains, Scott, Jean, Kurt, Kitty, Evan, and Rogue have just shipped in to a survival training camp. Scott is chosen to be group leader due to his scholastic achievements. When Sergeant Hawke leaves the kids grumble about being there. Rogue says she's going AWOL and asks if anyone knows how to hot-wire a school bus. Scott stops them and Jean says it's either this or survival training with Wolverine. They all grab their bags and move off grumbling.

Lance and Scott race over an obstacle course. Lance uses his power to dunk Scott in the river. Spyke starts to go after Lance, but Jean stops him and says that they've agreed not to use powers. She says Scott can deal with Lance like a leader. Scott uses an optic blast to knock Lance out of his raft. He then takes Lance's raft and wins the race. Jean says "or not".

Everyone argues over who should have won fairly. Hawk blows the whistle and makes them all do push-ups. He tells them that if they want to prove how tough they are, they have to get a flag from the top of Mt. Humiliation. Quicksilver says he can get the flag while his team takes a break, Nightcrawler says "not before I can". Hawk tells them that the whole team has to reach the top and retrieve the flag together.

On the mountain, the X-Kids save the Brotherhood. As they're pulling out the last one, Avalanche, the Blob points towards the flag and Quicksilver takes off. Nightcrawler ports up and they reach the flag at the same time and begin wrestling over it. The X-Jet pulls up suddenly and Storm tells them over the loud speaker that Xavier and Mystique are in trouble. Scott asks Lance if he's ready and he replies, "Let's go!". The X-Jet flies by Sgt. Hawk and the flag and a pic of all of the X-Men and Brotherhood at the top of the mountain drops to the ground beside him.

Everyone arrives as Juggernaut reaches for Xavier, but Jean uses her Telekinesis to pull him away. She can't hold him long though and collapses.

Cyclops blasts him, but Juggernaut picks up a piece of the Danger Room wreckage and throws it at him. Avalanche uses his tremors and is able to make him stumble. Quicksilver is able to get to him long enough to open another latch. Juggernaut throws Quicksilver off, but Storm steps up and disorients him with wind gusts. He stumbles back and falls. Kit and Rogue phase out of the wall and are able to get the last two latches. Toad uses his tongue to grab Juggernaut's helmet and yank it free. Xavier is then able to use his powers to take out Juggernaut.

As the X-Kids and Brotherhood cheer and congratulate one another, Mystique comments about it not being a sight you see everyday. Xavier agrees and Mystique takes the Brotherhood home.

At the start of Season Two, Lance makes several attempts to impress Kitty by causing earthquakes during a school assembly. In the next episode they become lab partners and close friends. It is during this time that the two start dating, in spite of their friends protests. During the third episode of Season Three the two break up briefly when Kitty learns that Lance was going to assist Duncan Matthews in beating up the X-Men (Scott specifically). Lance and Kitty's relationship seemingly ended, realizing that as long as they are on rival teams their relationship would not work out. However they reunite in the final episode Avalanche ready for fight.

Lance calls Kitty to see if she wants to go to the mall with him. However after he hears laughing coming from her end, she tells him she'll think about it and says she'll call him back.

Kitty & Lance were talking on the phone until 1am. Later that day Kitty confronts Lance at the water fountain and the two share an awkward moment. Kitty asks Lance to the dance, and he says he'll think about it. After a moment, he says yes; and in celebration, accidentally causes a small earthquake.

Later at The Brotherhood House, the gang is giving Lance a hard time about going to the dance with Kitty.

In the gym, Lance and Kitty are enjoying themselves when the rift opens up between them. Two creatures emerge and the rest of the students run for it. One creature goes for Kitty, but it passes through her. It gets back up and makes its way to Scott and Taryn. Another one come at them and Lance stops it by ripping up the ground around it.

Before Wanda Maximoff can make her appearance, Lance searches for Kitty, When he finds her, he pleads for her to leave, as he know what is coming. Kitty is upset with him for thinking she should leave her teammates like that, and walks away from him. Lance continues to try to convince her to not get involved, and kitty, becoming more upset with her phases though him to help her teammates. Leaving Lance upset with both her, and the situation. Once the fight is over, Lance looks relived that Kitty is okay (if maybe still a little embarrassed for losing, and being forced in-between the floors thanks to Scarlet Witch).

In Ascension II after the fight with Apocalypse is over and they have all won, everyone begins to walk back to the blackbird. Kitty & Lance have spotted each other and begin walking back together. Lance puts his arm around Kitty, while she leans her head agents him as they continue to walk in silence. Back at the Mansion they are shown in each others arms. Both having just experience such a close call with death seems to have put things in perspective for them, and they are both very willing and ready to give their relationship another try.

In The Future Kitty and Lance are believed to still be together.

Lance tends to be very protective of Kitty, to the point of nearly getting killed when he pushed Kitty out of the way of a falling mascot statue. It is also an interesting note that Lance has never really fought, or harmed Shadowcat in any battle, with a few exceptions. Rather, he just irritates her with his earthquakes, but never directly harms her.

Specific to this universe, Lance has a relationship with Kitty.

It should be noted that it looks like the Brotherhood is working for S.H.I.E.L.D. in the future, and in the comics, Kitty is/was a SHIELD agent. 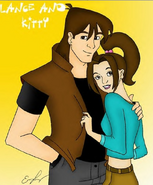 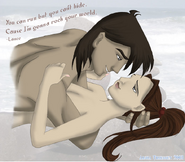 A couple in a class revolving around chemistry

Add a photo to this gallery
Retrieved from "https://x-menevolution.fandom.com/wiki/Lance_%26_Kitty?oldid=32269"
Community content is available under CC-BY-SA unless otherwise noted.