"What's up, guys? Tell me, why are you such losers?"
—Gambit to The Brotherhood

Gambit is cunning, smart, tricky, manipulative, and sneaky. Despite all this, he seems to have a good heart deep down and even a bit of a conscience. Gambit can be prone to sarcastic outbursts when annoyed or stressed out, and he can make a good quip here and there. He would sometimes rather talk a problem out then fight, depending on the situation. It was never shown whether Gambit was flirtatious or even romantic, but it's very clear, Gambit's a powerful mutant, but also is an expert thief and has a charm that the other Acolytes lack. He's a master of witty one-liners and has an abundance of charisma and self-confidence.

Remy (Gambit) is tall and very masculine, shaped with a V-shaped torso, broad shoulders, long, muscular legs, square jaw and clearly-defined muscles and abs. He has brown hair in a bowl cut (though it could be longer without the cowl) and red irises with black sclera. Normally, in Day of Reckoning Part Two Gambit also has brown pupils with a white sclera, but this was an animation error. Remy is usually seen in a navy uniform, with a maroon stripe on the front and back running down both legs, that is left a little unzipped at the front. It has rolled-up sleeves. With this, Remy wears a belt, fingerless gloves with silver wristlets, silver boots, and his favorite accessory: His brown trench coat. Remy also wears a cowl on his head that seems to extend to underneath his uniform. Remy is never seen without his staff and trademark playing cards. He has an extremely, good-looking face and is considered one of the most handsome males in the series.

Gambit has the ability to take the potential energy stored in an object and convert it to pure light, pink-colored, kinetic energy, thus “charging” that item with highly explosive results. Gambit prefers to charge smaller objects, such as his ever-present playing cards, as the time required to charge them is greatly reduced and they are much easier for him to throw, although Gambit has been shown to use his power on a city bus, causing an enormous explosion. The only real limitation to this ability is the time required to charge the object: The larger it is, the more time it takes to charge. Most charging takes place through direct skin contact. The power of his explosions is dependent on the mass of the object he is charging, for example, a charged playing card explodes with the force of a grenade. Gambit can also use his mutant abilities to accelerate an object's kinetic energy instead of converting its potential energy; for example, he can charge his Bo staff with enough kinetic energy and power to level a house.

Remy LeBeau’s life is wrought with various complications. He is an orphan, and there are no reliable records as to who his birth parents are. The earliest insight into Remy’s life are the adoption papers that were signed by Jean-Luc, who took him in when he was less than a year old, and raised him in New Orleans.

A thief from Cajun country, Gambit was unveiled as one of Magneto’s Acolytes, and seemed to take particular interest in Rogue from the moment they met. He did whatever Magneto asked him to, and no one but the two of them ever knew why. He helped Magneto try to defeat Apocalypse, but after his death, Gambit went solo.

The President gives a speech saying that the X-Men have been cleared of all charges and that the real villain behind the Sentinel fiasco, Bolivar Trask, has been jailed. He says that everyone should be more open-minded about mutants and that from now on they should be free of any prosecution.

When Mesmero returned to enslave Rogue, using her to absorb all of the powers of the X-Men and The Brotherhood, Sabretooth was still working with Magneto. During Scott and Jean's graduation ceremony, Magneto and his team arrived, ruining the ceremony, and allowing Magneto to tell them what Rogue had done. The two teams combined, and Charles Xavier realized that he might know where the Tomb of Apocalypse was. With the help of Cerebro, Charles unlocked the memories he gained from Mesmero and believed to have found that Apocalypse was entombed underneath Giza. However, when the combined Brotherhood/X-Men team arrived, they found out it was a trap, and fought their way through to an ancient room, where Beast translated the Hieroglyphics and found out that En Sabah Nur was the first mutant, and that an ancient pharaoh named Rama-Tut had found a ship he believed not of this Earth, though it had really been created in the future, and that Apocalypse had seized control of it in order to turn all the world's people into mutants. Using his own mind to control the ship, Xavier teleported them all to Apocalypse's real tomb in Tibet, where Gambit, Sabretooth and Wolverine had tracked Mesmero, Rogue and Mystique to already. However, the team arrived too late to stop Apocalypse from drawing all of their powers from Rogue and becoming powerful enough to live up to his name.

Remy later returned and kidnapped Rogue, taking her to New Orleans and offering her a chance of freedom from the X-Men. After they run into Julien Boudreaux, and get into a tussle with people who were holding Gambit’s father captive, Gambit used Rogue’s absorbed knowledge of the people who attacked them to try and free his own adopted father. Initially angry that she had been used once again, Rogue gives him some harsh advice, but still leaves him to go back with the X-Men, telling him she doesn't care what he does. But he then said that she's got people watching over her, and giving her his queen of hearts.

Months later Xavier’s gets a small glimpse into the future shows that Gambit later did join his team. After the fight with Apocalypse Remy is seen to be standing next to Rogue (with his arm around her) for a group picture.

In The Future Remy is seen in a group photo with the future X-Men, the New Mutants, and their unaffiliated allies.

Other faces of the Gambit 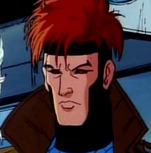 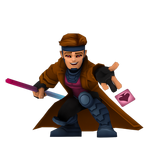