"I can see now that teaching mutants will require entirely different skills. "
—Beast

Personality-wise, Beast is a very friendly and warm-hearted man when he isn’t affected by the beast’s anger. He was also very smart, which was implied when he was shown to understand Egyptian Hieroglyphics.

Beast also has a genius intellect, and is also refined at times. He does like to have fun, though — especially with snowball fights.

In his mutated form, Beast has long shaggy hair, relatively long arms, and opposable thumbs on his feet, much like a giant gorilla

Originally, Beast had a more human disposition, but an adverse reaction to a serum he developed to suppress his mutation caused his mutation to change, giving him full-bodied, blue fur and an ape-like physiology. Mutant physiology grants him superhuman strength (he was seen bending a steel girder in the episode Day of Reckoning II), speed (by running on all fours), stamina, reflexes, balance, endurance and agility as well as large paws with opposable thumbs instead of feat which he can use to grasp objects or climb almost any surface and terrain with superhuman dexterity.

Henry McCoy's mutant powers revealed themselves at birth in the form of unusually large hands and feet, likely caused by his father's exposure to massive amounts of radiation during an accident at the nuclear power plant where he worked. To avoid the embarrassment to their family and friends, Henry's parents moved with him to Bayville, New York City. During his teenage years, Henry's abilities began to develop rapidly. Using his advanced intelligence, he concocted a serum to allow him to look as human as possible. Around this time, Professor Charles Xavier contacted the young mutant, offering him the chance to control his mutation without the use of chemicals, but Henry's confidence in his abilities made him politely refuse the good professor's offer. Soon, Henry joined the football team, becoming a star and leading the team to many victories until his graduation. Due to his aggressive nature on the field, McCoy's peers gave him the nickname of the Beast.

After a few years in college, Henry received his master's degree and returned to Bayville to teach Phys. Ed. and Advanced Chemistry. Over the years, his system had begun to grow resistant of the serum, and he was continually feeling his mutancy closer and closer to taking control of him.

After taking on the job as Science teacher at Bayville High, McCoy began having trouble controlling his rage. Hoping to stop it before it hurt anyone, McCoy developed another serum, which had dire consequences, as it turned his skin into blue fur; the mindless Beast was finally defeated by The X-Men, and Professor Xavier was able to return his mind to him. With McCoy now a wanted fugitive, he realized he could no longer teach at Bayville. Xavier offered him a role as an instructor at his school, allowing him to teach young mutants how to control their powers and how to use them for the good of humans and mutants. McCoy gladly accepted the role.

At the beginning of chemistry class, Lance and Kitty talk as the new chemistry teacher comes in and introduces himself as McCoy. He apologizes for being late as he is also their P.E. coach. Then he tells them that they're going to make stink bombs. Everyone cheers as Kitty and Lance smile at one another.

The next day at track try-outs, Duncan and Scott undergo another testosterone-athon. Duncan ends up tripping Scott and knocking off his glasses. McCoy witnesses this and throws Duncan off of the team. McCoy helps Scott retrieve his glasses and tells him to take a break.

Meanwhile, Jean Grey loses control of her powers again as she hurls shot-puts out in random directions. McCoy is able to catch two with his bare hands, another barely misses Scott and flies straight for Duncan’s head. Scott knocks it off course with a beam and it lands with a crash into Principal Kelly’s desk instead. Scott Summer rushes to Jean Grey and asks her what's wrong. She cries that she can't control it, and then passes out.

When Beast decided to go on a weekend retreat to the Great Redwood Forest of California, he chose to take along Iceman, Spyke, Wolfsbane and Sunspot, who had less-than-exceptional grades in their nature science class. When Beast was captured by Bigfoot trackers, the students helped to free him.

He read the Hieroglyphics that were talking about Apocalypse

Inside Area 51 Wolverine is being questioned by the military while the others are standing nearby in clear plastic cells. The Blob is still being cut free from the green stasis goo.

When the alarms go off the officer questioning Logan leaves to see what's going on and during the confusion, Spyke is able to pop a spike into Logan's restraint and free him. Wolverine returns the favor and as Spyke frees the others Wolverine takes on the remaining troops. Blob is able to break free from the goo and they round up all of the troops and get them contained.

Nightcrawler and Mystique arrive, though a little late, and they take off to meet up with the others

When more troops start closing on them, Mystique points the way for everyone to keep following as she gives an order to Lance. Security seals all exits, but they find Iceman & Shadowcat who are able to find a hatch that leads to the roof. Scott traps mystique down below and Avalanche goes after him, but Jean stops them. Storm shows up and they all escape.

Back at the lookout, the X-Men talk over the loss of the Xavier Institute and Xavier. Kitty's upset because they can't return home or to high school. Scott is upset that he didn't get the info about Xavier's location from Mystique, but Logan tells him that they'll find him on their own.

Ororo tells them all that they have a new world to deal with now — one that fears them... and that somehow they have to find a way to teach them that they are the good guys before it's too late.

A congressional hearing on the "Mutant menace" is being held at The White House and Ororo and Hank show up to speak on behalf of the mutants.

At the hearing, news coverage of Juggernauts rampage is brought on. Juggernaut is shown wrecking a tank and the speaker says that the mutants are all monsters. Ororo and Hank argue that they're all not that way.

Back at the hearings (where they've witnessed the whole X-Men vs Juggernaut fight) the speaker is shocked and asks "What did they do?". Ororo tells them that they've done what they were trained to do — use their powers for good.

Later, the President gives a speech, saying that the X-Men have been cleared of all charges and that the real villain behind the Sentinel fiasco — Bolivar Trask — has been jailed. He says that everyone should be more open-minded about mutants, and that from now on they should be free of any prosecution.

In The Future Beast, along with many other X-Men are still at the X-Mansion in active service.

Other faces of Beast 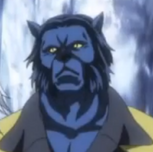 Retrieved from "https://x-menevolution.fandom.com/wiki/Beast?oldid=33076"
Community content is available under CC-BY-SA unless otherwise noted.