Apocalypse (born En Sabah Nur) is one of the world's first mutants who planned to remake the world in his own image.

"I have planned nothing. I am but an instrument of destiny... The future came to me in that craft. I have embraced it, and merged with its technology, so that I may lead the evolution of the human race"
—Apocalypse to Charles Xavier

Apocalypse is a silent-yet-powerful mutant, trained since childhood to become even more powerful by his adoptive father's training. He is a powerful schemer, having planned his goals for a long time. He sees himself as an instrument of fate, which will push the evolution of humankind even further. This all seems to indicate that he has a god complex.

Apocalypse possesses a multitude of powers derived from his original mutation, the powers of several other characters, the technology of the Eye of Ages that he merged with thousands of years later. All in all, Apocalypse can be considered one of (if not) the most powerful mutants currently on Earth.

Apocalypse, as a infant, was abandoned in the middle of the Egyptian desert thousands of years ago. He was rescued by a tribe of bandits as the group found him by hearing his cries and adopted him. He soon became the best warrior of his tribe to the point he was considered unbeatable. The Pharaoh Rama-Tut, who came from another time and possessed futuristic technology, feared Apocalypse. So, he sent his army to attack Apocalypse's tribe, killing everyone including his adoptive father, Baal.

Rama-Tut was unsuccessful as Apocalypse's anger grew so strong that he killed off the rest of the enemies. Apocalypse attempted to hunt down Rama-Tut but he fled, leaving behind some of his advanced technology. One such device was the Eye of Ages, which would give Apocalypse the tool to change all of humanity into mutants, but many would not survive the transformation. When he learned how to harness its power, he decided to use his own body to power the device. When he started using the device, it started sucking life out of him, and he was betrayed by his servants who caged him in it. Buried in the mountains of Tibet, his servants put the Eye of Ages in a chamber sealed behind three doors that would take the power of a mutant to unlock. They left behind Hieroglyphics warning of Apocalypse to further prevent his escape.

Mesmero offers to help resurrect Apocalypse. In order to open the first door out of three to Apocalypse's chamber, he mind-controlled Jean, Kurt, Spyke and Shadowcat to fetch mysterious rings around the world. He succeeds, and it happens that those rings are put on a special bar to make a literal key.

For the second key, Mastermind, who was with Magneto, reads his mind and, from what he saw in Mesmero's mind, told The Master of Magnetism that there are two halves to an ancient artifact. When the two halves are joined, they form a huge spider that will be the key to the Second Door. It happened to actually be the guardian for the second door, so, when Magneto destroyed it, the second door opened.

For the third key, Mesmero mind-controls Rogue to absorb all the X-Men's, Brotherhood's, and Acolyte's powers. He uses Mystique to open the door to the chamber by having her place her hands on a Mystical Stand that tuns her entire body to stone, and Rogue then gives Apocalypse his powers.

Magneto attacked him (by using the remains of some robots and satellites), but he is supposedly killed by him. Then Professor X and Storm tried to talk to him, however, he did not agree with them and supposedly killed them, too.

Later, as he sets up the four pyramids to turn the world's population into mutants, he uses his Four Horsemen, Xavier, Magneto, Storm, and Mystique, who were merely mind-controlled and enhanced, to guard the pyramids and the Sphinx. After a while of battling, the slaves seem to have won until Wolverine, Nightcrawler and Cyclops breach his pyramid. Wolverine then sends Nightcrawler to scout ahead but Apocalypse knocks him out cold. Then Mystique (controlled by Apocalypse) then knocks out Cyclops. Then all of Apocalypse's slaves are out cold.

Rogue, by then using the powers of Dorian Leech, attempts to shut down Apocalypse in his tomb and with the help from Wolverine, trapping Apocalypse in time forever.

But it is suspected that Apocalypse will one day return.

Other faces of Apocalypse 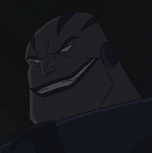 Cite error: <ref> tags exist, but no <references/> tag was found
Retrieved from "https://x-menevolution.fandom.com/wiki/Apocalypse?oldid=32720"
Community content is available under CC-BY-SA unless otherwise noted.