"Um man! Just as we were getting close, you know? I even filed to change my name back to Summers'"
—Alex to Scott

Alex, before the events of the cauldron, was a care free happy teenager, who suffered from intense joint pain, that no doctor had been able to treat. He still managed to enjoy surfing and make friends with his fellow surfers, despite this. He believes his older bother Scott is dead, having been killed in the plane crash. One day, ( the cauldron part I) after paddling out to sea on his surfboard, to lounge in the sun, In an attempted to relive one of these headaches, his powers are awakened, when a shark knocks him off his surfboard and attacks him. In desperation to defend himself, Alex puts his hands up, which release intense energy that hits the shark, injuring it. When the shark comes back at him again, Alex uses his new found power to kill the shark. After he makes it back to shore, stunned and shocked with what just happed, he then has an encounter with Magneto how tries to bring him into the Brotherhood, and tells him that of his older bothers Scot's existence. After he is reunited with him, after nearly, along with Scot becoming part of the Brotherhood, he begins to deal with the shock of being a mutant and reconnecting with his older bother. His headaches suddenly stop, apparently improving his ability to surf. He appears to become, at least, a semi pro surfer by the time of Scott's second visit in "adrift", as he now has a fancy new surfboard, wetsuit as well as video gear to record surfing highlights. He profess the idea of going pro to his brother instead of joining him at the institute. As he has a real passion for surfing.

Alex is muscular, especially his upper body, with notable tanned skin, these features appear to be the result of him being an avid surfer. Hs usual outfit is a flowered sleeveless shirt with a white tank top and blue pair of shorts with sandals. When he surfs in the early episodes, he wears a blue sleeveless wet suite that extends to just above his knee's. In later episodes, He wears an orange full wetsuit that extends to his ankles with full long sleeves.

Alex's body absorbs certain types of electromagnetic energy, including sunlight, metabolizes it, and releases it in concentrated, destructive, ruby-red beams from his hands. Due to a similar genetic makeup, this energy is ineffective against those related to him with similar powers, such as his brother, Scott Summers, because Scott's body will simply absorb it. Unlike his brother, Alex didn't suffer an injury as a child and has control over his powers, controlling the intensity of his energy beams with no artificial aid. The first time these powers manifested, Alex suffered from a burning sensation in his hands, though this seems to have disappeared now that he has gained control of his powers.

When Alex was around 5, he and the rest of his family were involved in a plane accident. The plane for an unknown reason was on fire, and going down. Their parents gave Alex and Scott the only parachutes that were on the plane and had them both jump out. Both boys thought the other brother had died. Scott spent a month in a coma while Alex was adopted in Hawaii. Even the hospital Scott went to thought Alex was dead. [1] [2] [3]

In the Cauldron part 1, it is revealed and confirmed by Alex, that he is living with foster parents. Yet, he takes their last name "Masters" and seems to be otherwise treated as if adopted. For example, in addition to all of his surf gear, he had a fancy room with an over sized bed, and plenty of possessions including the computer that he uses to talk with Scott. as shown in Growing Pains. Later on in "adrift" Alex is referred to having adopted parents, not Foster parents. its not clear if his foster parents adopted him after the events of the Cauldron, or if he had been adopted from the beginning and this was simply not noted.

When Scott Summers went to visit his only living relative, he also discovered that like himself, Alex was a mutant with the ability to generate energy blasts, though from his hands. At this time, Magneto found the boy, and took them with him to his Asteroid M, as well as his other "chosen" mutants. Magneto was able to cajole the two young mutants into testing his mutant enhancement machine, which was powered by the mystic Gem of Cyttorak. Cyclops emerged with the newly named Havok, both able to fully control their powers. The two boys' minds were altered by the gem, and they were now the most powerful members of Magneto's Brotherhood of Mutants. Under Magneto's orders they attacked the jet conveying Wolverine, Mystique, and the rest of the X-Men, causing the jet to crash into Magneto's Asteroid M. Ultimately, the two were forced to exhaust their powers destroying Asteroid M, returning them to their previous selves.

After this event, Alex decided to remain in Hawaii and considered joining the professional surfing circuit, which is his true passion. Eventually, he returned his name to Summers, and soon afterward he and Scott had a bit of an adventure in the ocean. Alex had been swept out to see while surfing, and when Scott tried to rescue him, he wound up stranded at sea with his brother. The two were eventually rescued by the X-Men and returned Alex to his home. Only time will tell if Alex will join the X-Men or not.

In Hawaii Alex Masters is out lounging on his surfboard in the ocean. A great white comes along and decides to make him lunch. He's knocked off the board and when he tries to climb back on he slips and goes under. The shark makes a run at him and Alex raises his hands in front of him. A blast of energy flies from his hands and hits the shark. When the shark turns and comes at him again he blasts it again but on purpose this time. He kills the shark and floats to the surface with his hands still glowing.

Alex has climbed up onto the beach. He looks at his hands, then groans and covers his face. Magneto shows up, saying he can help. Alex tells him he doesn't need any help and is leaving when Magneto tells him he can give him answers about what's happening to him, and stop the pain. Alex asks if he's some sort of doctor. Magneto tells him no, he's come to offer sanctuary.

Alex comes up behind Scott. They hug and laugh, then Alex talks to Scott about meeting Magneto. He shows Scott a sphere and tells them Magneto wants to meet with them. He shows Scott his power and tells him he's going and begs Scott to go with him. Scott agrees. They climb into the sphere and it takes off.

Magneto tells Xavier that for everyone that he has to force, another recruit comes along willingly. Alex and Scott walk in (wearing matching outfits no less) and Xavier looks shocked and says "Scott, No!"

On Asteroid M, Xavier confronts Scott about why he's there. Scott says he's just there to listen. Xavier points to Jean, Rogue, and Ororo and asks Scott if they're just there to listen also. Scott gets angry and wants Magneto to let them out. Magneto says he's only being cautious and he'll let them out soon. Xavier tries to talk some sense into Cyke, but Magneto puts him into stasis also. Scott freaks and is going to blast Xavier out, but Magneto tells him that if he does Xavier will not survive decompression. Scott turns on Magneto, but Alex steps in and tells him that no one should be getting hurt. Scott says he doesn't like it but does as Alex says anyway.

On Asteroid M Alex walks up behind Scott and startles him. More flashbacks of the boys jumping from the plane, and Scott's 'chute catching on fire causing him to plummet to the ground. He tells Alex he's sorry for not being there for him, and Alex tells him that it hasn't been so bad. He complains about his joints burning, and Scott asks him how Magneto has promised to help him. Mags comes up behind them and tells them he's going to help them both. He takes them into the Asteroid and shows them a Gem of Cyttorak and tells them about the "Genetic Enhancers" he's been able to build using the gems. He claims that the enhancers will fully evolve their mutant powers and put them in total control. He tells Scott he'll let the other X-Men go once Scott has gone through the enhancer. Magneto sends Sabretooth through as a demonstration.

Sabretooth emerges from the enhancer bigger and more feral. Alex talks Scott into going into the enhancer. Xavier tries to stop Scott, but the door slams shut as Scott tries to get out. Scott and Alex come out of the enhancer as adults (both with white hair). Magneto gives Alex the codename Havok and tells Scott he can take off his visor. Then he tells them that the enhancer has affected their minds as well, wiping out emotions.

They pick up an incoming aircraft and Magneto tries to use his powers against it. When he realizes that there's no metal for him to control he sends out Alex and Scott to "defend them"

When Alex and Scott blast the Velocity, Wolverine brings it crashing down right on top of them. It skids to a stop in the main chamber, burying the brothers in debris.

Scott and Alex end up freeing themselves by blasting their way through. They argue with Jean and Xavier. Jean finally tells Scott that if he's the future, she doesn't want anything to with it. She walks away as Xavier tells Scott he just crossed the line, and then leaves also.

Alex and Scott change their minds and make a break for the jet, which is already taking off. Tremors break up the ledge they’re on, and they’re dumped off. As they fall, they hold hands, and then use their powers to slow their fall and land on the moon’s surface. The X-Jet comes back for them, but there are still too many tremors and falling debris, and it can't get to them. Asteroid M begins to fall, and Alex and Scott use their powers to blast it apart as it crashes towards them. They both collapse to the ground back to normal.

The X-Jet lands and Scott apologizes to everyone for the way he’s been acting. Alex says “So much for Havok, but at least I have my brother back.” Xavier tells Alex that they’ll help him with his powers if he wants — and that they’ll do it together, unified, as the X-Men.

Scott talks to Alex via videophone on his computer. Alex tells him that he's considering going pro on the surf circuit. Scott is disappointed that Alex isn't coming to join him in the X-Men.

Approximate time Alex decided to file to legally change his last name from Masters back to Summers.

Later still, during one winter, Scott went to visit Alex in Hawaii, where the two ended up caught in a very severe tropical storm, from which Storm and the Professor had to come rescue them. Still, Alex did not stay with the X-Men.

It is left unknown what becomes of Alex Summers in The Future as he's last seen in a group photo with the future X-Men, the New Mutants, and their unaffiliated allies.

Other faces of Alex 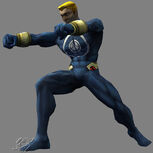 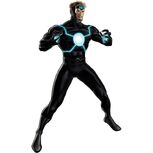